Saturday night was a date night with the previously mentioned “new gentleman caller”. I’m choosing to avoid nicknaming him according to the roster, in which he would be number 9, because I want to separate him from the pack. Here’s my logic, maybe if I don’t loop him in with the rest of the motley crew, it will give us (too soon?) a better shot at making it past date 2, which I hope will happen! So I’m taking him out of the line-up and pulling the plug on this man baseball game I’ve been playing in but ironically enough, he’s a baseball coach.

The date with “Coach Exxon”, as I will be calling him, started on a interesting note. Tap tap tap: “Hello sir, I’m with traffic control at this metro station and now tell me, sir, can you read that sign for me? See what that says? It says ‘No Stopping at Anytime’ doesn’t it? Yes, so do me a favor…next time you’re picking up your loved one (pointing at me), can you park over there, over there, over there, or even over there? See where I’m talking about? Please don’t pick up your loved one (pointing at me again) in the bus lane next time.”  … Well, hi, good thing I’m a “loved one”.

We went to eat at The Cheesecake Factory, yeah we did, be jealous. Mmmm I love dates. Drinks first, then dinner, and finishing up with a white chocolate and blueberry piece of cheesecake. I like Coach Exxon. Everything was going great and he was asking a ton of questions, really trying to get to know me. After a few heavy hitters, he thought he’d lighten the mood up by asking me what my favorite color is. [Insert movie quote now] “Milk was a bad choice”. I hate that question. I don’t have a favorite color. There is no one color that jumps out to me as the BEST and if I were to gauge it by my clothing, accessories, or car…my favorite color would be black. Now isn’t that depressing? This led to a debate and a long explanation of why I hate that question. Coach Exxon is the type of person who actually has a favorite song, a favorite movie, and a favorite color (forest green, like really?) He can definitively answer these questions but I, on the other hand, cannot. If one were to ask me what my favorite type of music is, I have a detailed explanation about how I like a lot of different kinds of music and it depends on my mood. There is no way I could ever pick an absolute favorite song either, that’s just wrong.

Angie: I’m gonna make a decision. (Pause)
Decision made. (Pause) Kate, I want you to put your baby inside me. 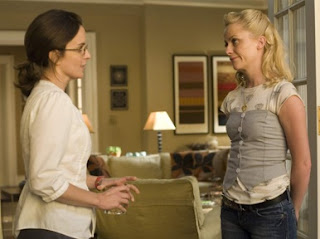 This is how I need to start making decisions like my favorite freakin’ color.

Throughout the night, whether it was about dessert, colors, religion, almost anything that he asked me, I was rarely able to give one concrete answer. I am quite possibly one of the most indecisive people in the entire universe. Yes, I asked everyone and their mother in every galaxy of the universe and concluded that I am highly indecisive. One of these days I’m going to call a meeting of fellow indecisive over-analyzers over a pitcher of margaritas and I’m going to force us all to pick a favorite color, even if it takes 10 hours! An indecisive person can be seen as weak or a pushover but luckily I know myself well enough to know that when a situation is very important to me, I can make the decision pretty quickly. Actually, being an “everything happens for a reason” kinda person, I find that the answers to the significant questions have already been answered for me and I just have to be aware of the clues.

I hope you all don’t take this the wrong way but I’ve had a little saying since middle school when the bigger life decisions starting popping up and it is, “things just seem to work out for me”. The reason I can think that way without feeling like an a$shole is because I know that while I leave a lot up to fate, I do work my butt off. For example, in middle school I never expected to get into Oak Knoll. I had a tutor for that silly SSAT test and I worked hard in school but when that acceptance letter came I really couldn’t help but be absolutely shocked. The same goes for Georgetown and for tough jobs and internship positions that I’ve applied for. I’ve come to learn that my phrase is what keeps me sane in situations that I have little control over but it’s also what I believe makes those things (OKS, GU, etc) happen for me. If you expect good things for yourself, then good things will happen. It’s like in sports when you’re shooting a basketball, now go ahead and hear your coach’s voice in your ear, “if you think you’re going to miss that free throw then you’re most likely going to miss it”. It’s all that “think positively, it ain’t over til it’s over” stuff the movies and our moms repeat for us over and over.

Anywho, back to Coach Exxon. I feel very comfortable with him and never once felt like the whack-a-doo that I was when with Magic 8 Ball. What’s the word I’m looking for here? Is it his demeanor? Some people just have a way of being relaxed and welcoming. Thankfully, he was also able to playfully call me out on some of my shizz too. For example, he poked fun at how I say, “meebawls” when trying to say “meatballs” and repeatedly brought up the whole color fiasco.

[Side note before I go all deep on ya’ll again]: Mom-mom & Pop-pop, I just want you to know that you seem to come up on almost every date that I go on. This time, “Geener”, it was about your accent. Last time it was about playing Pretty Pretty Princess for hours and the time before that it was about painting the walls in the laundry room. Basically, I love you and you have had an intense impact on my life. [Side note over].

Mmkay, so anyway, as the date continued we started asking some interesting questions. I had asked him to pick a day in his life that he would want to do over and over again. I wanted to find out what makes him really happy, blah blah. He told me something about baseball and then asked me about a day in my life that I would want to go back and do differently. Ugh, I really had a hard time with this one. Am I not so weird? I mean, really, I’m so strange. Of course there are little things here and there that I would go back and do differently but even when I know I’ve really screwed up, I’ve also learned something. Ok so change “weird” to the “next author of one of those damn Chicken Noodle Soup for the Soul books”, which I actually can’t stand to read.

I can think of a few times when I’ve really messed up, done something wrong or hurtful, but then I can immediately also think of why in the long run it either taught me a lesson, ended up working out for the better, or made a relationship stronger. Is this weird? I’ve never thought of myself as a self-proclaimed “have no regrets” type of person but maybe I am. Damn, Coach Exxon, you’re really making me think over here. It’s pretty cool though because as much as I’m thinking about all of this now, I was able to freely hash all of this with him Saturday night because it felt like I’ve known him for years. That demeanor, let me tell ya, he’s a good listener but also equally contributed his own thoughts and opinions. I never felt like I was dominating the conversation, which is a very good thing.

With every date I’m continuing to learn about myself. Ahh, we 20 somethings, it’s always something new every g.d. day. Yes, yes how exciting but it’s a miracle you don’t see 20 somethings dropping like flies in the middle of the street from exhaustion.

So on a final note about Coach Exxon, I could really relate and appreciate his open book-ness. What did I just say about myself in a recent post…wasn’t it that I tend to word vomit, express just about everything I’m thinking and feeling, and how it irritates the cooh-cah outta me when I’m seeing someone who doesn’t do the same? Why yes, I think that’s exactly what a recent post was about. Coach Exxon uttered three little words that meant a lot to me, and would mean a lot to most girls. It was a simple, “I like you”, mid kiss of course (oww oww). Look, I know that is hard for some to say, even harder for some to hear, but for me, it was just what I wanted to hear. I like to know where I stand because we’ve already established (and beat to friggen death) that I will keep ya posted on where you stand with me. I think Friday Night Lights sums up my life pretty well, “clear eyes, full hearts, can’t lose”. Ta ta for now!

The trials, the tribulations, and the triumphs of a sassy and sophisticated 20 something girl
View all posts by sasssays →
This entry was posted in Dating, Weekend Warrior. Bookmark the permalink.